Roberto Otero obtained his PhD in 2002 from Universidad Autónoma de Madrid, where he investigated the relations between the morphology of nanostructures and their electronic structure. In 2002 he moved to the University of Aarhus in Denmark as a Research Assistant Professor funded through a Marie Curie Fellowship under the supervision of Prof. Flemming Besenbacher. During his postdoctoral stage, Roberto Otero became interested in the self-assembly of organic molecules on solid surfaces, making important contributions to our current understanding of hydrogen-bonding at surfaces (Angew. Chem. Intl. Ed. 44, 2270 (2005), Science 319, 312 (2008)) and the diffusion of complex organic adsorbates (Nature Materials 3, 779 (2004)). In 2005, he joins Universidad Autónoma de Madrid as Ramón y Cajal tenior position, which became permanent in 2011, and in 2008 he was recruited by IMDEA Nanoscience as Associated Researcher.

The Photon STM group is currently developing several research lines, aiming at a) the fabrication of new nanostructures on solid surfaces starting from organic material, including graphene nanostructures and b) the electronic and optical characterization of such nanostructures with atomic resolution, by Scanning Tunnelling Microscopy, Spectroscopy and Luminescence. 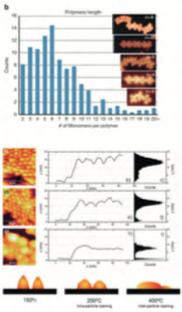