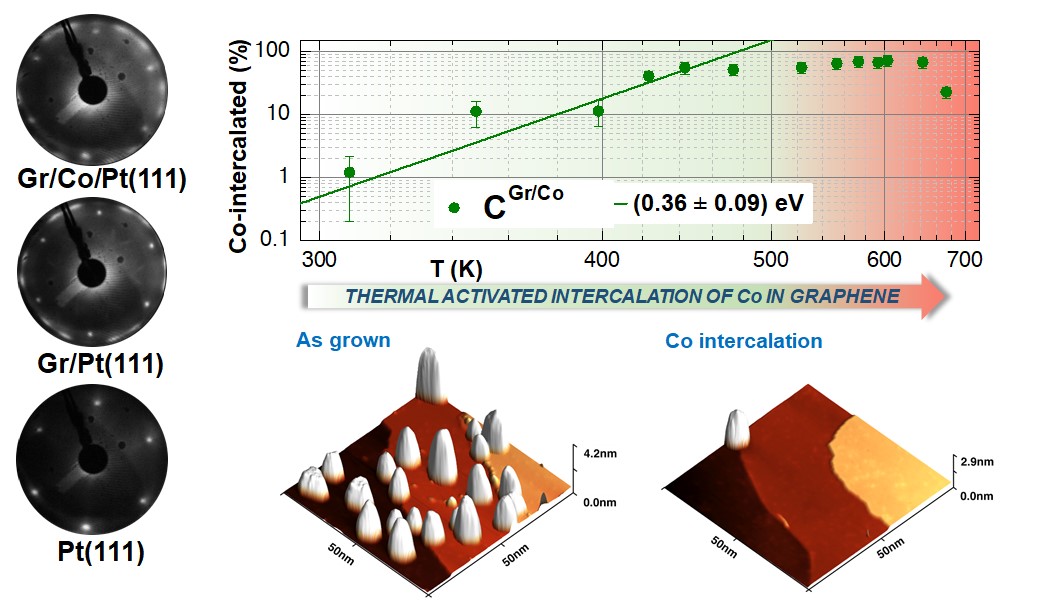 The future sensing and data storage technologies will be based on the exploitation of the spin-orbit physics in ferromagnetic- heavy metal systems. Graphene (Gr), a single atomic layer of graphite, is considered an ideal material for room temperature spintronics because of its unique and intrinsically tuneable electronic properties. However, its technological development for this purpose relies on the capability to engineer high-quality interfaces in which the negligible intrinsic spin-orbit interaction in Gr would be modified to allow for efficient room temperature spin injection, detection, manipulation, or gating.

A research team at IMDEA NANOCIENCIA, guided by Dr. Paolo Perna, has introduced a novel methodology based on the combined use of ultrahigh vacuum growth, metal intercalation, spectroscopy, and tunneling microscopy to fabricate and characterize in situ high-quality Gr-based, perpendicular magnetic anisotropy systems. By combining a collection of surface science ultra-high vacuum techniques, including XPS, LEED and STM, and performing experiments as functions of the annealing temperature, the team has discerned the processes of Co intercalation underneath Gr grown epitaxially on two different heavy metal surfaces, Pt and Ir, which were deposited onto (111)-oriented insulating oxides.

The experiments show that the thermally activated Co intercalation occurs in two steps in which the deposited atoms penetrate in Gr either via direct Co-C exchange or through surface defects and edges. The intercalated atoms diffuse then in 2D underneath Gr and form flat, homogeneous, and crystalline layers. These processes are characterized by a low activation temperature. The Co intercalation occurs at lower temperature and is more efficient in Gr/Pt interfaces than Gr/ Ir. Higher temperatures promote the intermixing between the FM and the metallic buffer. This research hence demonstrated that the metal intercalation allows for efficient tuning of the structural and electronic properties of Gr and enables the growth of high-quality flat layers with tailored magnetic properties.

This work is a collaboration between "SpinOrbitronics" group led by Paolo Perna and "Scanning Probe Microscopies and Surfaces" group led by Rodolfo Miranda together with Fabian Calleja (IMDEA Nanociencia). The work has been partially funded by the Spanish Ministry of Economy, Industry and Competitiveness, the Regional Goverment of Comunidad de Madrid and the Severo Ochoa Programme for Centres of Excellence in R&D, awarded to IMDEA Nanociencia.